The Power of BMI

It all started in the Harvard Innovation Lab…

“There’s technology to help those that need a prosthesis in the U.S. but why can only 4% of the people who need these prostheses afford them?”

After years of research and development facing this issue, BrainCo engineers created the BrainRobotics Prosthetic hand, which gives an accessible way for upper limb different individuals to use cutting edge technology  to easily control a prosthetic hand with muscle signals.

Developed by Graduates of Harvard University & Incubated in the Harvard Innovation Lab.

Our parent company, BrainCo, is the only company that has developed BMI applications in the prosthetics as well as the cognitive wellness and training space.

We have scaled our operation to 150 people around the world, making us one of the largest, if not the largest, BMI company in the world.

The Next Generation of Upper Limb Prosthetics 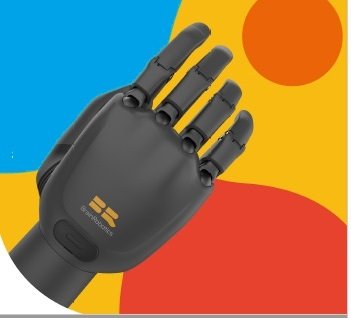 There are over 530,000 existing upper limb different individuals living in the US currently.

185,000 people have an amputation every year in the US, upper limb makes up 35% of those amputations.

We have made breakthroughs in three major aspects for functional prosthetics:

Leveraging these breakthroughs, BrainRobotics is building technology that will make a true and lasting difference for millions of people around the world.

At CES 2016, Brainco, the parent company of BrainRobotics, was showing how their new headband was controlling their STEM kit, now named the Neuromaker, when an amputee came up to ask if it might be possible to control a real prosthetic hand.  The planning began towards making it possible to do just that and later that year the first BrainRobotics prosthetic hand prototype is built.

BrainCo, a VIP team in the Harvard Innovation Lab, was also a Gold Winner at MassChallenge, one of the world’s largest accelerators.

Dr. Molei Wu joins the team and is the BrainRobotics team lead.

The first BrainRobotics hand gets fit on Mr.Ni for a show in China called "My Future."

A 22-year-old patient was able to complete a piano duet using the prosthetic hand with LangLang, a famous pianist.

The World Opens Up

BrainRobotics wins the CES innovation award and The 100 Best Inventions of 2019. The design for the hand, as it appears today, is finalized.

BrainRobotics is a best of the best Red Dot Winner.  User testing begins.

After taking a pause to truly listen to our users and assess the ever changing upper limb and reimbursement landscape, BrainRobotics decides to unbundle its offering and allow a user to have the ultimate freedom to switch between their devices, with the addition of a QWD, and ensuring that the terminal device allows the user to decide how they want to access their grips.